Today in the Flickr Favourites it's the turn of the traditional costume of Urk in The Netherlands. Urk is a town in the Flevoland province in the central Netherlands. Urk was in the past an island in the Zuiderzee. In 1939, a dike from the mainland to Urk ended the town's island status, just as the Afsluitdijk project was changing the salt water Zuiderzee surrounding Urk to the less saline IJsselmeer. Later in the 20th century, sea-bed areas surrounding Urk were reclaimed from the sea and became the Noordoostpolder. Urk is still a fishing village and religious life has also traditionally been very important to Urk's inhabitants. The kraplap (i.e. bodice) is in Urk made of beautiful coloured silk with embroidered flowers on the front (called the "hartje" or "small heart"). The silver head iron that holds the lace cap with yolk coloured trim, is the oldest type in The Netherlands. The striped apron is the same as the one in Volendam. 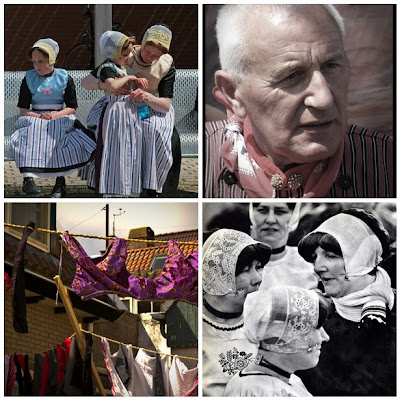 And two picture postcards from my own collection. 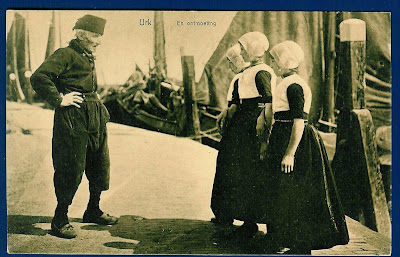 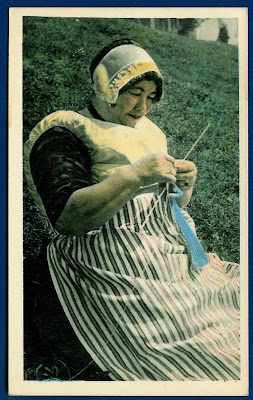 Love these old traditional costumes. Thanks for showing!

Love them too... we must keep remembering our tradition and spreading them to the world!

The name 'urk' reminds me of a children's television program. I can't remember whihc one though! I don't think it had anything to do with traditional costumes you described!

I live near Holland Michigan and am making an Urk hat for a friend. Your pictures help to get the details just right. Thanks so much! I grew up regularly seeing Dutch folk costumes from many different provinces. They are all so different and beautiful!

That is so nice to hear Rene ! You can see more Urk costumes on my postcard site: http://www.inoudeansichten.nl/ansichten/g1807-urk.html

Hope that helps too :)

Any research on why some of the kraplaps have black only embroidery and others colored?

Hi Kari, here's a small explanation:
In the late 19th century, the Urker women wore white kraplaps with black embroidered motifs for the Sunday and for special occasions. These were initially large and became smaller in the course of the twentieth century. After 1945, Urker women wore more and more colorful satin kraplaps with colored embroidery, on both weekdays and sundays.